Show Me The Money

It may seem gauche to launch into talking about money from the get-go but, when you’re considering who will design and build what is probably the biggest investment of your life, cost is always front of mind so it’s bound to come up sooner or later.

And when the inevitable question arises, “So, how much does a Box™ house actually cost?” they want to give you as accurate an answer as possible. Yet here’s the thing. They’re not a cookie-cutter company and no building site is exactly the same. Plus their clients generally want a home that reflects their needs and their style – not something picked from a brochure. That’s why they approach Box™ in the first place. The variables are endless.

That said, after two decades in business, Box™ know a thing or two about the how, what and why of budgeting. They know where things can blow out. They appreciate where the costs can be contained and, on the other hand, where there should be non-negotiable investment in the project.

How do they know? By seeing the future in the past. They call it ‘back-costing’. Simply put, that means they put previous projects through a process to ensure they can compare apples with apples. Only by fully understanding how costs have been historically apportioned, can they hope to give a truthful representation of them to would-be clients considering whether their budget matches with theirs.

To research the data, they analysed 29 of the homes over 400K that Box™ delivered between November 2016 and February 2020 (any older and the costs would have been outdated), compiling a spreadsheet with some basic reference points such as: project location; whether the site was flat or sloping; the size of the home; how many levels it had; its cladding; how much decking.

The information is presented in four ‘buckets’: pre-construction; siteworks; house; external works. Pre-construction includes the design component of the cost, plus fees such as building consent, engineers and all those bits of paper required before the ground is shovel ready. Siteworks involves everything it takes to make the section ready for the house build including foundations, drainage and the driveway. The ‘house’ bucket contains every item required to deliver the job to turnkey stage including the fixed appliances and even the painting (there’s no fiscal hole in their bucket!). Finally, external works are factored in – decking, fences, railing and external staircases. Importantly, all numbers include GST.

Add these together and you achieve the total project cost – one that is far more comprehensive and useful than a cost-per-square-metre rate that is often quoted but usually doesn’t reflect reality and where parts of the puzzle are ignored or overlooked. For those of you who have read this far, here’s the current ‘magic’ number: $4K – $4.5K per square metre (house only). Preconstruction, Siteworks and External works still need to be factored in. 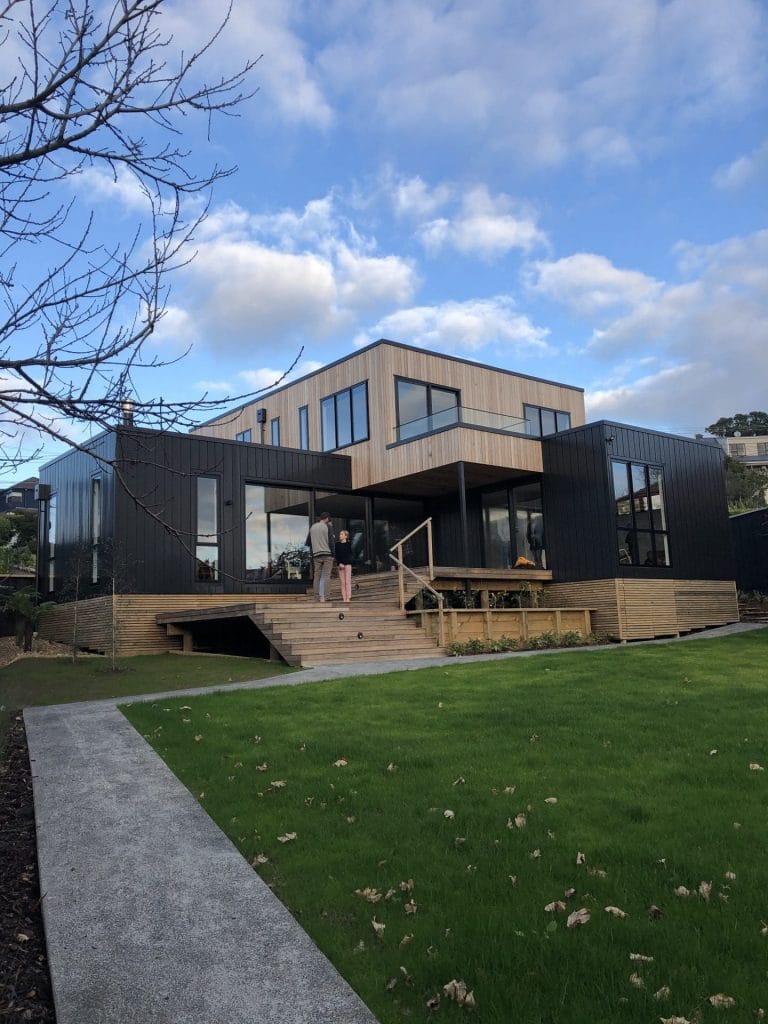 This back-costing tool is unique to Box™ and is a real enabler, allowing a much better way to gaze into the construction crystal ball and predict the financials. They can, of course, filter results depending on your requirements – and can draw some interesting conclusions. For example, they can say with some certainty that the smaller the house, the higher the cost per square metre (makes sense really). However, that doesn’t necessarily mean you should rush out and build a McMansion. There is a sweet spot and their spreadsheets tell them that’s around 170-180 square metres.

Some results are surprising. For instance, when they delved into the data, they discovered that 13% of the overall budget was spent on developing a flat site as opposed to 17% on a sloping or steep site. They anticipated that divergence would be a lot larger however the data also shows that sloping site builds generally have larger overall budgets. Decking was 5% of budget on a flat site and 6% on a sloping one. Again not much difference.

Plotting the homes on a scatter graph gives a visual picture that allows them to identify trends. It’s a way to quickly see projects that fall outside the ‘norm’ – either far more expensive or far cheaper. At times, they can point to an unusual client request to explain the disparity, such as one where an entire level was subterranean! Other times, the back-costing tool is a way for them to self-regulate: have they under or over-estimated part of the budget?

Talking turkey (or should that be turnkey?) is such an integral part of Box™’s relationship with clients that the foundations need to be solid. The numbers must stand up to scrutiny. Box™ aim for a transparency of process that puts everyone on the same page from the outset. Because if they get the maths right, and the figures agreed, their collective focus can turn to the fun part of crafting a home that puts you and your family at its heart – and the mortgage in its place.

Want to know more? Dan Heyworth, one of the founders of Box, discusses this in detail on a You Tube vlog here: